A's look to pull level with Astros in lefty matchup 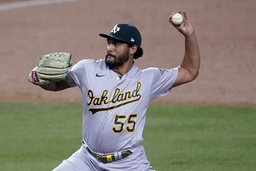 LOS ANGELES -- The Houston Astros and Oakland Athletics know all about playing in homer-friendly ballparks, yet the launching pad that was Dodger Stadium on Monday afternoon still was a bit jarring.

Heading into Game 2 of the American League Division Series on Tuesday, an even bigger burden will be placed on the starting pitchers. It will be a duel of left-handers as the Astros send Framber Valdez to the mound while the A's hand the ball to Sean Manaea.

After a regular season in which Correa hit five home runs in 58 games, an adjustment suggested by hitting coach Alex Cintron has turned the shortstop back into a high-level performer.

"Throughout the year I was trying to find my power strike and I couldn't seem to find it," said Correa, who went back to videos of the Astros' championship season in 2017 to set him free. "When we were playing the Rangers (in September), Citron said, 'Let's look at 2015 when you were first in the big leagues and doing great.'"

With his hands back to where they were in his rookie season, Correa believes he can do even more in the series. The conditions would suggest the same.

Long with the reputation as a pitchers' park, Dodger Stadium played smaller in Game 1 due to warm temperatures and a steady breeze. The power alleys were more like those at the Oakland Coliseum, and the left field line more closely approximated Minute Maid Park.

Khris Davis, Sean Murphy and Matt Olson homered for the A's. Alex Bregman hit a home run to go along with Correa's two for Houston.

"I mean, it's just one of things where (as a pitcher) you know you've got to keep the ball down," said Murphy, the Athletics' catcher. "It plays to our advantage, too. It's one of those things you just kind of have to make an adjustment to, and it goes both ways."

Valdez gave up just five home runs in 70 2/3 innings during the regular season, when he went 3-5 with a 3.57 ERA. His start in Game 2 comes after he delivered five scoreless innings in relief of Zack Greinke during the Astros' 4-1 victory over the Minnesota Twins in the opener of the wild-card round.

Valdez is 0-1 lifetime against the A's over three appearances. His lone start in those outing came Aug. 8, when he gave up just two runs (one earned) on seven hits over seven innings with one walk and nine strikeouts. However, he still came away with the loss in a 3-1 Oakland victory.

Manaea was a bit more susceptible to the long ball than Valdez this season, giving up seven home runs in 54 innings. The lefty served up two home runs in his final start of the regular season, but that was to a Los Angeles Dodgers team that led baseball with 118 homers.

He will return to the same mound where he finished the season on Sept. 23, only now he will be facing the Astros. Manaea did not pitch in Oakland's 2-1 series win over the Chicago White Sox in the wild-card round.

A hot start on offense in Game 1 and the knowledge that they bounced back after a series-opening defeat to the White Sox has the A's a bit less tense going into Game 2.

"Yeah, I mean, it's a longer series," A's manager Bob Melvin said. "Everybody wants to win Game 1, but we faced two elimination games and responded nicely. I expect the same (Tuesday)."