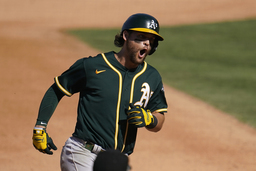 LOS ANGELES (AP) Ramon Laureano sensed his teammates' energy dragging. They were down three runs with time running out to save their season.

So the Oakland outfielder lit into them in the dugout during the sixth inning, getting so loud he was heard easily in mostly empty Dodger Stadium.

And just in case Laureano's words did not get the message across, he ripped a double as the A's got a pair of sacrifice flies in the eighth to rally past the Houston Astros 9-7 on Wednesday and avoid elimination in their AL Division Series.

Suitably inspired by Laureano's outburst, Chad Pinder tied the score with a three-run homer in the seventh before Sean Murphy hit the go-ahead sac fly in the eighth.

"Ramon got everything fired up, saying this wasn't it, we're not going to let it be our last game, we're gone through too much this season," Pinder said. "It was awesome."

Houston leads the best-of-five series 2-1 and can advance to its fourth straight AL Championship Series with a victory in Game 4 on Thursday.

"There's never a doubt in this team," Oakland starter Jesus Luzardo said. "We can go ahead and win three in a row."

Houston's bullpen had stifled Oakland in the first two games with seven shutout innings of one-hit relief, but Pinder ended that dominance.

Houston led 7-4 when Marcus Semien and Tommy La Stella had back-to-back singles off Josh James starting the seventh. Pinder hit a first-pitch slider to the opposite field for Oakland's fifth homer, a drive chased by right fielder Kyle Tucker until he ran out of room at the short wall.

"They beat us with the home run ball," Houston manager Dusty Baker said. "Tough to take but we have to come back tomorrow."

The teams have combined for 18 homers - including seven in Game 3 - in the neutral-site series at Dodger Stadium featuring all day games. After two straight days in the 90s, the temperature cooled to 81 degrees.

La Stella was hit on his right forearm, loading the bases and forcing him from the game. Pinder, who went 3 for 4 with four RBIs, followed with another sacrifice fly in the eighth.

"Once our backs are against the wall, suddenly everything changes," Hendriks said. "Everybody has that bit of extra drive."

Carlos Correa singled leading off the bottom of the eighth and Tucker reached on catcher's interference by Murphy, a call the A's challenged unsuccessfully.

Yuli Gurriel popped out, Aedmys Diaz advanced the runners with a groundout, and pinch-hitter Josh Reddick struck out, smashing his bat on the ground and breaking it over a knee.

"I'm an emotional guy and I like to see it out of hitters too," Hendriks said.

Houston took a 7-4 lead with five runs in the fifth, when the Astros sent 10 batters to the plate. Diaz hit a tying, two-run homer off rookie Luzardo, and Brantley, Bregman and Tucker drove in runs. Houston was slowed when Jose Altuve was thrown out on a relay by Olson at first when he tried to go from first to third on Brantley's single.

Hendriks threw 37 pitches. He vowed to be ready to pitch again Thursday.

"I wasn't coming out of the game," he said. "They were going to have to wrench the ball out of my hand."

Zack Greinke's right arm is structurally sound and the Astros say they are hopeful he can pitch at some point in the postseason. The right-hander started Game 1 of the AL wild card series on Sept. 29, but was lifted after allowing one run and two hits and three walks in four innings. Greinke tailed off late in the season, posting a 5.73 ERA over his final seven starts; in that span, dating to Aug. 23, he gave up at least three runs in each outing. He threw off flat ground after the Astros' win in Game 2 and Baker said he was told the session went "pretty good."

Pinder's go-ahead, two-run single in a 6-4 win against the Chicago White Sox sent the West champion A's into the Division Series. He missed time with a hamstring injury down the stretch.

"So far it hasn't gotten worse on me," he said.

The A's will start RHP Frankie Montas in Game 4. Baker said Greinke "might" be a possibility for the Astros.