Angels to buy Angel Stadium, stay in Anaheim through 2050 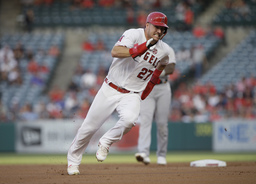 ANAHEIM, Calif. (AP) The Los Angeles Angels have reached a proposed agreement to stay in Anaheim through 2050 as part of a deal in which they will pay $325 million to buy Angel Stadium and its surrounding parking lots from the city.

The Angels and the city government announced the deal Wednesday that likely secures the franchise's long-term future in Orange County. The deal allows the team to decide whether to use the property to build a new stadium, which would be funded by the Angels.

"We appreciate the Mayor's leadership in working to keep the Angels here in Anaheim, which has been our home for over 50 years," Angels owner Arte Moreno said. "Today is the first step in enabling us to invest in our future by building a winning team and delivering a high-quality fan experience."

The team had a deadline of Dec. 31 to opt out of its lease or to stay committed until 2029. Instead, the sides reached a deal that allows the Angels to control the property and its plans for the 133 surrounding acres while relieving the city of its costly maintenance obligations on the 53-year-old stadium.

The proposal will be considered by Anaheim's City Council in stages later this month and in 2020, but it is expected to be approved.

"After years of uncertainty, we have a path forward for baseball in Anaheim," Anaheim Mayor Harry Sidhu said. "This proposal reflects what we've heard from our community by keeping the Angels in Anaheim, bringing money for our neighborhoods and the prospect of more affordable housing, parks and jobs for Anaheim."

The deal would extend through 2050 with options for the Angels to stay for an additional 15 years. The deal contains no specific commitments about the developments to be built on the land, but the city anticipates the possibility of hotels, affordable housing and entertainment properties within the Platinum Triangle, Anaheim's name for the district between Angel Stadium and Disneyland, which is 3 miles away.

The Angels have endured four straight losing seasons, but their long-term foundation has grown increasingly solid in 2019. Earlier in the year, they signed three-time AL MVP Mike Trout to a $426.5 million contract through 2030, the largest deal ever given to any athlete in a North American team sport.