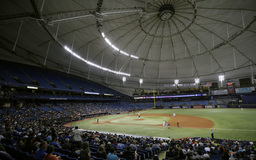 ST. PETERSBURG, Fla. (AP) The mayor of St. Petersburg says the city will not allow the Tampa Bay Rays to pursue a plan to split home games between new stadiums that would be built in Florida and Montreal.

Mayor Rick Kriseman informed the City Council in a memo Wednesday that he and the team agree that the "best path forward" is to abide by an existing contract that requires the Rays to play at Tropicana Field through 2027.

The Rays have played home games in St. Petersburg since their inception in 1998. Principal owner Stuart Sternberg has been trying to garner support for a replacement to Tropicana Field for nearly a decade and envisions building two open-air stadiums to house the team as a viable solution.

"We agree generally with Mayor Kriseman's characterization of our months of conversations, though we would like to clarify two points. First, we do not agree that this is the best path forward. Second, we asked for the opportunity to explore this concept with both St. Petersburg and Montreal, and with Tampa and Montreal," Sternberg said in a statement.

"We recognize that we must now consider our post-2027 options and all that entails," Sternberg added, "and we remain steadfast in our belief that the Sister City concept is deserving of serious consideration."

Major League Baseball granted the team permission in June to explore the prospect of splitting games in open-air stadiums that would be built in St. Petersburg and Montreal, which has not had a team since the Expos left Canada after the 2004 season and became the Washington Nationals.

Kriseman rejected the notion then and reiterated Wednesday the city will not commit public money to fund a new ballpark for a part-time occupant.

The mayor said instead, St. Petersburg remains open to helping build a stadium for a full-time team.

"In accordance with the existing use agreement, should the Rays organization wish to continue exploration of the shared season concept with Montreal, that exploration must be limited to the 2028 season and beyond," Kriseman said.

Private equity mogul Stephen Bronfman, whose father Charles was the original owner of the Expos, is part of a group spearheading effort to return baseball to Montreal.

"We remain steadfastly committed to the sister city concept with the Tampa Bay Rays and its realization in as timely a fashion as possible. Our group continues to be excited by the proposed innovative concept," Bronfman said in a statement.

The Rays routinely rank near the bottom of the majors in attendance, including 29th among 30 teams this year, and have been pursuing a replacement for Tropicana Field for the past decade.