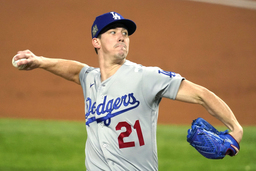 LOS ANGELES (AP) Walker Buehler and the World Series champion Los Angeles Dodgers avoided a salary arbitration hearing scheduled for Thursday, agreeing to an $8 million, two-year contract that would escalate to more than $12.12 million if he starts regularly this year and wins a Cy Young Award.

With the Dodgers trailing Atlanta 3 games to 2 in the NL Championship Series, he pitched six shutout innings as Los Angeles won 3-1 in Game 6.

Buehler allowed one run over six innings to beat Tampa Bay 6-2 in World Series Game 3, giving the Dodgers a 2-1 lead in the Series they won in six games.

He was eligible for arbitration for the first time after earning $223,519 in prorated pay last year from a $603,500 salary. Buehler has 2 years, 168 days of major league service and is eligible for free agency after the 2024 season.