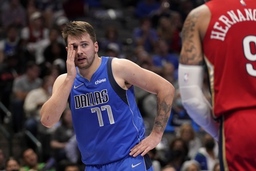 DALLAS (AP) Brandon Ingram scored 24 points and New Orleans beat Dallas 107-91 on Friday night, two days after the Pelicans lost by 32 to the Mavericks at home while letting them set a franchise record for shooting percentage.

The Pelicans missed their first eight shots and started 2 of 20 before going 13 of 19 (68%) in the third quarter and outscoring Dallas 63-43 after halftime for their fourth win in six games following a 3-16 start.

The Mavericks shot 68.7% in a 139-107 win to start the home-and-home set, but surpassed the 26 misses from that outing early in the third quarter.

"We had to fix the matchups, switch some things around," said rookie Herbert Jones, who spent some time defending Doncic while Garrett Temple did the most to frustrate the Dallas superstar. "We knew that they had made a bunch of tough shots. We just came out ready to compete on the defensive end and make it super tough on them. I feel like we did that tonight."

"We started to miss shots. We started to hang our heads," Dallas coach Jason Kidd said. "That just can't happen. We're not going to be a team that shoots 70% again. We said it before the game. New Orleans is going to play hard. And they played hard. They wanted to win more than we did tonight."

Dallas was again without Kristaps Porzingis because of another injury, a left knee contusion. The oft-injured Latvian missed five games early in the season with a back issue.

New Orleans trailed 48-44 at halftime but took control with a 26-8 run in the third quarter. The lead reached 17 early in the fourth, and Dallas couldn't get closer than nine points in a third consecutive home loss.

Ingram had five assists in the third quarter, when he scored seven points along with Jones and Valanciunas had eight.

"Everyone feels a part of the game when the ball is moving and hopping," Pelicans coach Willie Green said. "I'm proud of the turnaround ... and with the resilience of our team coming back and winning on their home floor."

Mavericks: G Frank Ntilikina was active after missing four games with a right calf strain. ... Porzingis missed 47 games in his first two Dallas seasons, playoffs included, with various injuries and because the club often sat him on the second night of back-to-backs. ... Former Maverick Jerry Stackhouse was in the crowd. The Vanderbilt coach's team plays at SMU on Saturday.

Of the four victories in the current surge by the Pelicans, three were on the road against Western Conference playoff teams from last season in Utah, the Los Angeles Clippers and Dallas.

HARDAWAY OFF THE BENCH

Dallas guard Tim Hardaway Jr. went to the locker room briefly in the first half after injuring his right quadriceps but was back before halftime.

Hardaway scored 12 points on 3-of-11 shooting in his second game coming off the bench after Reggie Bullock replaced him as a starter, with Kidd trying something different with a cold-shooting team.

Pelicans: At Houston on Sunday.

Mavericks: Memphis at home Saturday to finish a back-to-back. It's the first of two meetings between the teams in a span of five days.