Turner heads into another season with Pacers, trade talk 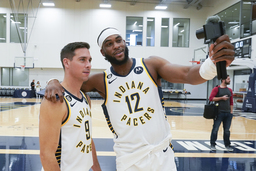 After eight years in town, the 26-year-old is the longest-tenured and most accomplished Pacers player. The guys who mentored him as a rookie have all moved on and many are out of the league.

And as Turner enters the final year of his contract, he knows the constant rumors about his future suggest he will soon be traded. Until then, Turner promises to ignore the distractions and focus on what he does best - playing basketball.

"My job is to come in here and help these young guys out," he said Monday during the team's media day. "That's where all my intention lies. As long as I'm in this uniform, I'm going to go out there and represent the state how I'm supposed to represented and represent my team in the same manner."

It hasn't been easy going through the transition from regular playoff participant to rebuild mode.

He also knows its the price of doing business in the NBA.

Turner watched the Pacers trade three teammates who were supposed to form the future of the franchise - Malcolm Brogdon, Caris LeVert and two-time All-Star Domantas Sabonis - over the past eight months. Then he watched the Pacers sign Phoenix Suns center DeAndre Ayton to a $133 million offer sheet in July, a decision that almost necessitated Turner being dealt, too.

Instead, the Suns matched the offer and now Turner finds himself rejoining a young team full of potential, led by new point guard Tyrese Haliburton.

Instead of being bitter, Turner has embraced the role.

"He's obviously young, but I want to help Tyrese (Haliburton) reach his potential," Turner said. "I think the world is his and I just want to help him reach it."

Nobody is happier about that than coach Rick Carlisle.

Having McConnell and Turner, a two-time league blocks champ, both healthy should help. But Carlisle thinks the revamped roster will help Turner expand his game, too.

"Myles is a pro and he's made it clear to me that he's very excited about being here and he's excited to be here with a pass-first point guard," Carlisle said. "He's loyal to this organization."

Could Turner actually finish the year in Indiana? Perhaps. And if he does, Turner hasn't ruled out re-signing with the Pacers. He wouldn't say Monday whether he'd been offered an extension.

"There are no hard feelings in this business," he said. "You have to take the emotions out of everything and I learned that at a young age. I still hold true to that."