Makar scores in OT, Avs win 2-1 over Predators in Game 2 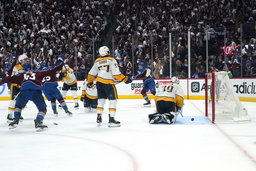 DENVER (AP) Cale Makar sent a low liner through traffic and then quickly found himself surrounded by happy teammates.

Maybe the happiest of all was at the other end. After all, it was goaltender Darcy Kuemper's 32nd birthday. The goal made for quite a present.

Makar scored 8:31 into overtime, Kuemper made 25 saves and the Colorado Avalanche beat the Nashville Predators 2-1 on Thursday night to take a 2-0 lead in the first-round playoff series.

Makar got the rebound in the middle of the offensive zone and blasted the puck right on target - just like he was all night. His 12 shots on goal was a new franchise playoff record.

"It just felt like the puck was finding us up top tonight," the humble Makar explained. "Not even me specifically, we were just trying to work it around."

"We felt like we were on them the whole third period, and eventually most of the time, the hockey gods are going to reward you for that hard work," Makar said. "For us, we were able to get a lucky one in overtime."

The series moves to Nashville for Game 3 on Saturday.

Connor Ingram stepped in and stepped up in stopping 49 shots as he made his first postseason start. He allowed MacKinnon's goal on the first shot of the game and turned back everything until Makar's goal.

The 25-year-old Ingram relieved David Rittich in the first game after the Avalanche scored five first-period goals. The Predators remain without top goaltender Juuse Saros, who is sidelined by a lower-body injury but could be back later in the series.

"This is what you dream about as a kid, to get the chance to do it and play in front of a crowd like that," said Ingram, whose parents attended the game. "It's a lot of fun."

Since moving to Denver, the Avalanche are 14-2 in a best-of-seven playoff series when they capture the opening two games.

Colorado had a goal disallowed in the closing seconds of the second period for goaltender interference. Artturi Lehkonen fell on top of Ingram before a shot from Valeri Nichushkin went in. The Avalanche challenged the play and the officials confirmed the call on replay.

It put Nashville on the power play to start the third. Shortly after, the Predators had a 5-on-3 advantage for 1:52 when Nichushkin went to the penalty box for a high-stick. But they couldn't capitalize. The best scoring chance was Makar on a breakaway, only to have his shot land in the glove of Ingram.

Ingram was at his finest in the third period when he stopped a point-blank shot from Nazem Kadri with his left pad. Ingram spent most of the season with the Milwaukee Admirals of the American Hockey League, where he went 30-17-9. He appeared in three regular season games for Nashville this season.

"He played great," Kuemper said. "Stepping in with not a ton of experience, he was definitely ready to go. Made it tough on our shooters."

Both teams struggled on the power play, going a combined 0 for 8. There were a combined 110 hits.

"They're a top offensive team in the league. They do this to a lot of teams," Predators coach John Hynes said. "If you're going to beat them, you have to have strong goaltending. I thought the way that our guys defended and the way that they played when they were under duress was at the level that you need tonight."

The first period was vastly different for the Predators than Game 1, when they allowed five goals. This time, they outshot the Avalanche by an 11-8 margin.

Trenin tied the game at 1-apiece with 4:41 left in the first. He celebrated by jumping into the boards behind the goal.

MacKinnon scored the first goal on the game's first shot 5:25 into the action. He lined in a shot to the stick side of Ingram on a mini-breakaway. MacKinnon has 73 points (31 goals, 42 assists) in 52 career playoff games.

"He's definitely a different animal in the playoffs," Makar said. "That's why he's probably the best player in the world."

Ingram has become a mental health advocate, talking about dealing with obsessive-compulsive disorder. He took part in an NHL player assistance program more than a year ago.

"It was also a point in his life where he hit rock bottom, but he also felt really supported," Hynes said. "He's grown up in multiple ways as a person, and also as a player."

Predators defenseman Roman Josi set up Trenin's goal to give him 31 postseason assists in his career. It ties Ryan Ellis for the most in Predators history.