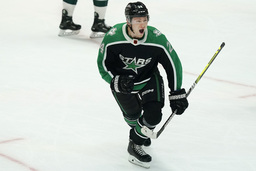 Mats Zuccarello and Kirill Kaprizov also scored in the shootout for the Wild, who swept a back-to-back in shootouts to extend their winning streak to four games.

Roope Hintz notched his second career hat trick for the Stars, who earned points for the 10th game in their last 11. Jason Robertson and Joe Pavelski scored in the shootout for Dallas, but Hintz's backhander rolled just short of the goal line across the crease.

Hintz's final goal, with the extra skater on, tied the score 5-5 with 2:11 remaining in regulation.

Minnesota used a three-goal burst within 2:50 of the second period to lead 4-1 and increased that to 5-1 29 seconds into the third period after Dallas goaltender Jake Oettinger was replaced by Scott Wedgewood.

Marc-Andre Fleury made 30 saves for the Wild.

Dewar's goal at 10:42 of the second period was the Wild's league leading fifth short-handed goal and the first allowed by Dallas this season.

During a first period marked by three minor penalties called on each team, Kaprizov converted on the Wild's third opportunity by flicking a wrister short side from the left circle over Oettinger's right shoulder for a 1-0 Minnesota lead at 15:04.

Eriksson Ek scored 29 seconds into Wedgewood's time on the ice on a deflection.

Dallas responded with Hintz's second at 7:11 of the third, Robertson converting his own rebound at 7:50 and Marchment scoring from short range at 9:55.

Dallas tied the score 1-1 at 6:58 of the second period when Hintz tapped home the rebound after Fleury stopped Robertson's backhander with his right skate.

Ryan Reaves and Jared Spurgeon had two assists each for the Wild.