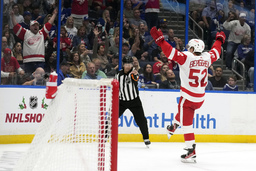 TAMPA, Fla. (AP) Ville Husso made 28 of his 44 saves in the third period and the Detroit Red Wings beat the Tampa Bay Lightning 4-2 on Tuesday night.

The Red Wings got goals from Michael Rasmussen, Jonatan Berggren, Adam Erne and David Perron. It was just their third win in the last 21 road games against Tampa Bay,

Detroit, which has missed the playoffs in each of the last six seasons, moved into a third-place tie in the Atlantic Division with Tampa Bay.

"I think they've turned the corner from that rebuild time to win now time, and their window is open now," Tampa Bay coach Jon Cooper said.

Husso, acquired from St. Louis during the offseason, improved to 11-4-3.

Steven Stamkos and Brayden Point scored, and Andrei Vasilevskiy stopped 22 shots for the Lightning, who had won eight of 10.

"I thought the boys were ready, but clearly a lot of bad habits that we've had as a team at times during the year came flooding out," Cooper said.

After Stamkos extended his point streak to 11 game with a goal at 14:52 of the third with Vasilevskiy on the bench, Erne put the Red Wings up 3-1 with 3:38 remaining, scoring into an empty net.

Point got another goal with an extra skater at 17:34, before Perron picked up another empty-netter in the final minute.

"I think it was a solid effort through the whole game," Rasmussen said. "A couple minutes here and there of kind of chaos. Everybody pulled their weight."

Detroit coach Derek Lalonde faced the Lightning for the first time after being an assistant coach with Tampa Bay from 2018-22, which included Stanley Cup championships in 2020 and 2021

"Really cool being back," Lalonde said.

Rasmussen said it was great to get the win for Lalonde.

"Obviously a lot of accomplishments here for him, and obviously a special game," Rasmussen added. "Happy that we could pull it out for him."

Rasmussen got past the Lightning defense to open the scoring 1:54 into the second from the slot off a nifty pass from Dominik Kubalik.

Berggren made it 2-0 at 5:59 of the third with a slot redirection of Olli Maatta's shot. The rookie has three goals and eight points in 12 games.

Kubalik had his breakaway shot stopped by Vasilevskiy and Jordan Oesterle hit the post as Detroit outshot the Lightning 12-11 during a scoreless first. Husso made strong saves on Nikita Kucherov and Vladislav Namestnikov.

Tampa Bay committed 11 giveaways, while the Red Wings had none in the opening 20 minutes. The total was 14-0 after two periods, and 16-1 overall.

Tampa Bay's Nick Paul had his short-handed shot hit the post with 45 seconds left in the second.

Tampa Bay had its 10-game power-play goal streak end after going 0 for 2. The Red Wings failed to score on its lone chance. ... Point had nine shots on goal, while teammate Anthony Cirelli had eight ... Vasilevskiy is 13-2-0 against the Red Wings.