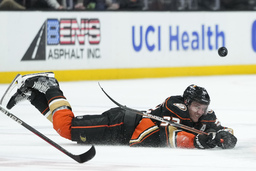 ANAHEIM, Calif. (AP) Ryan Strome scored at 1:56 of overtime and the Anaheim Ducks defeated the Carolina Hurricanes 4-3 on Tuesday night to stop a six-game losing streak.

Strome put a snap shot past goaltender Pyotr Kochetkov after getting a pass from Cam Fowler. Six of the Ducks' seven wins this season have come in overtime or a shootout.

It was Strome's second OT winner of the season, which is tied for the NHL lead with five other players.

"This year I feel like I've got a little more confidence in overtime for whatever reason," said Strome, who has seven goals in all. "We possessed the puck, we held onto it and when we got the one chance, we buried it."

The Ducks have a league-low 17 points but played one of their best games of the season. Anaheim's forecheck, which has struggled, was particularly sharp and helped lead to two goals in a game the Hurricanes never led.

"We've had a couple of games where we've done a lot of things right, and then something goes south late and you're not rewarded at all," coach Dallas Eakins said. "So to play one of the best teams in the league and to be able to swing back and forth with them is encouraging."

Carolina has earned a point in each of its last eight road games (4-0-4), marking the fifth road point streak of at least eight games in franchise history. The Hurricanes have already played 17 games away from home this season, the second-most of any team.

"You could see how exhausted everyone was in the third. We had no jump and really didn't play very well," Hurricanes coach Rod Brind'Amour said. "It's been a long season so far already, just the way it's gone. We dug in as best we can."

Comtois, who missed 11 games due to a lower-body injury, gave the Ducks a 2-1 advantage at 11:13 of the first period. He scored on a wrist shot in front after Jakob Silfverberg forced a turnover behind the net.

Carolina defenseman Brett Pesce took a puck to the throat on the play that led to Henrique's goal.

Kevin Shattenkirk shot the puck from near the blue line and it hit Pesce after it deflected off Henrique's stick. Pesce went down and clutched his throat as Henrique got possession of the loose puck and put a wrist shot past Kochetkov at 3:59 of the first to give Anaheim a 1-0 lead.

Pesce - who played his 500th game for the Hurricanes on Saturday - was taken to the locker room. He returned to the ice later in the period.

Skjei tied it less than two minutes later with a wrist shot into the far top corner of the net that beat Gibson glove side.

Hurricanes: With his second-period goal, Aho passed Pat Verbeek for eighth in franchise history with 193 goals. Coincidentally, Verbeek is Anaheim's general manager. .... Seth Jarvis extended his point streak to six games with an assist on Aho's goal. Jarvis has two goals and four assists during that span. ... Brent Burns has an assist in four straight games after he was credited with the primary assist on Staal's second-period goal.

Ducks: Henrique has 103 goals with Anaheim. He passed Andrew Cogliano for sole possession of ninth place in team history.