Rangers beat Avalanche 2-1 in SO for third straight win 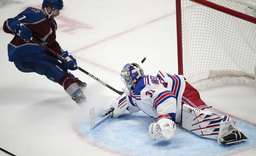 DENVER (AP) Mika Zibanejad and Artemi Panarin scored in the shootout, giving the New York Rangers a 2-1 victory over the Colorado Avalanche on Friday night.

Braden Schneider scored in regulation and Igor Shesterkin stopped 41 shots through overtime and both Colorado attempts in the tiebreaker to help the Rangers win their third straight after losing five of six.

"We found a way to win tonight with unbelievable goaltending," Rangers coach Gerard Gallant said. "Obviously, that was the biggest key for us tonight. We didn't play our best, but the goaltender was incredible."

Mikko Rantanen scored for the Avalanche and Alexandar Georgiev had 28 saves against his former team. Georgiev had given up 12 goals over his previous three games.

Colorado, marred by a slew of injuries to key players, has lost four straight (0-3-1) while being outscored 16-5.

Both meetings between the teams this season have gone to the tiebreaker as the Avalanche had 3-2 shootout win in New York on Oct. 25.

The Avalanche had a 16-6 advantage on shots in the third period and overtime. Colorado had an opportunity for a dramatic goal in the final seconds, but Devon Toews' shot was deflected by Shesterkin.

"He was fantastic from start to finish," Rangers defenseman Ryan Lindgren said of his goalie. "He made some huge saves. Even with one second left, he made a great save on the back door. We're used to it at that point. He's an incredible goalie, obviously. He was dialed in tonight."

Rantanen got the Avalanche on the scoreboard first, scoring his 16th with 5:22 remaining in the first period when, five seconds after winning a faceoff, he fired a wrist shot past Shesterkin. Rantanen has eight more goals than his next-closest teammate, injured star center Nathan MacKinnon.

The Rangers tied it at 4:56 of the second as Panarin raced the puck up the ice and passed it back to a trailing Schneider, who fired a one-timer past Georgiev for his fourth.

"He played really well defensively," Gallant said of Schneider. "He didn't take many chances, but he seized his opportunity."

Avalanche F Valeri Nichushkin returned to the lineup and played 22:02 while recording three shots. Nichushkin had missed the previous 17 games after undergoing ankle surgery. He had seven goals and 11 points in Colorado's first seven games of the season. Bednar said Nichushkin "looked a little rusty with the puck." ... D Brad Hunt made his season debut for the Avalanche after being recalled Friday from Colorado's AHL affiliate. Hunt played 10:25 and had one shot.

Avalanche: At St. Louis on Sunday.